Memories from my trip

If you haven’t already read part 1 or 2, go back and read it here. In part 3, I will talk about some of my memories when I was in Paris!

Paris was the city I was most looking forward to seeing. I had taken French classes

throughout middle and high school and was looking forward to actually being able to use my French. (side note: I was terrible! But even my very broken French helped with basic skills and navigation).

Our entry into Paris was pretty funny. We realized here that we had definitely overpacked. Each of us had two large suitcases, plus backpacks. When we arrived in Paris, we took the metro into the city from the airport. It was already dark outside. When we arrived at our stop, we dragged our bags through the underground tunnels and of course, there was no elevator or escalator so we had to pull our heavy suitcases up a ton of stairs. When we got to the top, we realized that we had exited into the middle of a roundabout! We stood there shocked for a moment and contemplated weather it was smarter to just cross the street in the roundabout OR to have to carry our bags back down the stairs, and hope to find another exit from the metro that didn’t put us in the middle of traffic and then have to carry our luggage back up more stairs. We decided that playing Frogger was the better choice and we ran across the street, making it safely to the other side. In hindsight, that was really REALLY dumb. Nowadays, its much easier to navigate because technology has come so far — we have GPS maps that you can download to your phone that you don’t even need cell phone service to utilize — we also have apps that translate to any language in the world making it easier to ask for directions and actually understanding them.

One of the memories that I had forgotten about when I was looking through my photos was a pretty funny mother – daughter moment. When we had gotten to the hotel one night, I kicked my shoes off after a long day of walking and my mom caught a very unpleasant scent. She made a huge deal about how badly my feet and shoes smelled. Of course, I only had the one pair of tennis shoes packed so she lost the battle – but only for the evening. The next day, we peaked inside a few shops in between museums and my mom found a shoe shop. She was so happy! After the shoe shop, we headed to the next museum and went down into the metro. While we were waiting for the next train, my mom insisted that I change my shoes while we wait, which I start to do. But then she insists that I throw away the Vans. I argued a little – they were my favorite shoes! I could 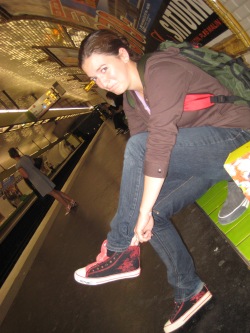 wash them! I won’t wear them on this trip anymore! – but it fell on deaf ears. As I put on my new shoes, she sets up my new box like it’s a prop in a photo shoot and takes a picture. “Mom! Don’t take a picture I’m sad!” Then she does the most mom thing ever – snapping another picture she says “You’ll thank me later for capturing this moment!” (Well, it’s later, so Thanks Mom!!). The metro was set to arrive soon, so we walked towards a garbage can to toss my old shoes, but then my mom recommended that I place them on top – maybe someone who needs them would find them. I like to believe that they got a second life and had more adventures.

One day when we were visiting Notre-Dame, we were across the

river headed to another museum when we saw a woman walking by holding her shoes and walking barefoot. It was a little odd because it seemed like a “walk of shame” type situation, but it seemed a weird time of day, which is why we took notice in the first place. She starts to walk up some steps and we watch her stumble up the steps only to realize we had made a terrible mistake — her very short skirt blew up in the wind as she climbed and she was not wearing anything underneath. My mom and I looked at each other not really sure what to say. Not only was she not wearing anything underneath, she was also a he. Once she was out of our sight, we started laughing at our very awkward situation.

We headed to Sacre Coeur, a Roman Catholic church one day. During our walk, a man stopped my mom and I and held up a gold ring. He spoke a little bit of english and he said that he had just found the ring and asked if it was ours. We said no, and started to walk away, but he stopped us again and said that he would give us the ring if we helped him out with some cash and that we could take it to a pawn shop or sell it. Ok, I know how this sounds now, but in the moment, this guy was SO CONVINCING!! We totally went for it and it wasn’t until we walked away that we realized we had been duped! I now have a (probably) worthless ring that (probably) turns your finger green as a souvenir.

Can-Can you do the Can-Can?

We did so much in Paris! We went to Moulin Rouge – one of the more famous Can-Can dancer venues in Paris. Being a dancer for 13 years (mostly ballet) I was SO excited to see a show here, where Parisian dance culture was strongly influenced and developed. My mom and I got all dressed up for the show that night. I was in a bright red babydoll style dress and some black heels. My makeup was done up and my hair perfectly straitened. We walked to the venue and waited in line. The tickets allow you entrance but the seats are not assigned. The ushers have full control over where you are seated. As they began seating people I started getting so nervous and excited. My mom asks the usher if he can give us a good seat. I rolled my eyes a bit thinking “yeah right, like he doesn’t get that request from everyone, and what makes US so special?” Sure enough, he walks us a bit past the middle of the stage and keeps walking closer… and closer… and finally brings us to two seats at a table DIRECTLY in front of the stage. I was shocked. But this was only the beginning! During the show, they had other acts in between the dancing scenes so that the women could change into other costumes and such – one was a ventriloquist. He invited other people on to the stage – and then he looked down at me and asked me to come up on the stage. I joined him and could not believe what was happening – I was actually on the stage at Moulin Rouge. At one point the ventriloquist had another man propose to me, the “Pretty American Girl”. I was brighter red than my dress. It was an amazing experience.

If you thought this was the end of our night, it was definitely not. With each ticket, you get a half a bottle of champagne included – so between my mom and I, we had a bottle of champagne. I was 17 at the time and although the laws were very lax, my mom only allowed me to have one glass of champagne at the show. She drank the rest herself.

We had just moved our hotel to be closer to Moulin Rouge and some other things we wanted to see in the area for a couple days. What we didn’t think about was that Moulin Rouge is situated inside Paris’s red light district, so as we walked back to our hotel late at night in the dark streets, we were approached by a man who tried talking to us. We just ignored him and kept walking. I was realizing that my mom, having drank quite a bit, was a little tipsy and maybe wasn’t realizing the situation we were in as clearly as she would have sober. I grabbed onto her and started walking a bit faster – my heart racing as the guy continued to follow and try to speak with us. He finally grabbed my mom’s shoulder to get our attention.

I turned around so fast and pushed this man away with such force and started screaming at him “Don’t f*ucking touch her mother f*cker!!!” among other, not so very nice things to say. My mom was in total shock. The guy was more stunned than she was at how this tiny little girl could be so explosively reactive and started trying to say sorry, but before he could finish, I had grabbed my moms arm again and continued walking away as quickly as we could looking back over my shoulder as I pushed my mom to move more quickly. Once we were a safe distance away and tucked around a corner I finally slowed down. This was probably one of the biggest lessons I had learned on my trip. Drinking or being out at night in an unfamiliar place is even more dangerous, especially being a women. In hindsight, my reaction may have been over the top, but I figured it was better to be safe than sorry. Once we got back to the hotel, we laughed a little at what happened and made plans to change hotels to a better part of town the next day.

Paris was a major focus of the trip, so most of our adventures were here. Scroll through some of my pictures from Paris!

Have you been to Paris? What are some of your favorite places you went to? Tell me about some of your experiences below!

View all posts by danyrambles

One thought on “The Trip that Started it All Pt. 3”